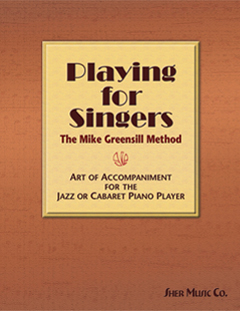 Art of Accompaniment for the Jazz or Cabaret Piano Player

In a world deeply populated with music books, this a special one that teaches how to accompany in an insightful and approachable way. Thanks to Mike's musical wisdom and experience, it fills a gap that finally addresses how to really do it!”
— Michael Feinstein


Playing for Singers explores, in depth, the art of accompaniment for the jazz or cabaret pianist.

Covers all the fundamentals of playing for vocalists. A comprehensive resource for everyone — from the beginning jazz pianist, to the crusty old pro needing a tune-up for his/her next accompanying gig!

In Playing for Singers veteran Mike Greensill brings his many years of accompanying experience to bear in exploring, in detail, the in's and out's of the accompanist's art as it applies to the performance of the “Great American Songbook.”

Mike Greensill's Playing for Singers is a most valuable and thorough resource and reference, a welcome addition to every accompanist's library. . . Bravo Mike!”
— Lee Musiker, accompanist to Tony Bennett

Mr. Greensill has drawn on his many years of experience backing vocalists to write this invaluable exploration of the various skills necessary to become an accomplished and in-demand vocal accompanist. This book sheds a bright light into an often shadowy corner of musical techniques, inadequately explored until now. Highly recommended.”
— Larry Dunlap, accompanist to Dame Cleo Lane, Mark Murphy, Bobbe Norris

Mike Greensill has written the book that should've been written a long time ago to open up the world of vocal accompanying to pianists of all styles and ability levels. Mike's decades of experience as a top- shelf accompanist and arranger make him the perfect person to have written this book.”
— Ted Firth, accompanist to Maureen McGovern, Tom Wopat, Carol Sloane, Hillary Kole, Brian Stokes Mitchell, Marilyn Maye

Mike has done the impossible — he has examined and dissected just about every aspect of collaboration with an artist, and done it mightily well. His singular, friendly and terribly humorous voice guides you through well-thought out how-to chapters, and he manages to pepper in quotes from some of the finest accompanists in the business. A must-read for any budding music director, arranger and pianist — this is a terrific book!”
— John McDaniel, Broadway musical director, conductor and arranger. Band leader for the Rosie O'Donnell TV show

Mike Greensill's Playing for Singers is a first — a unique addition to the now rich catalog of pedagogical materials directed to the jazz musician. Secrets of the great accompanists are revealed herein. Mike and his wife, vocalist Wesla Whitfield, have long been in the front rank of interpreters of the Great American Song Book.”
— Gary Foster, jazz recording artist

Playing for Singers is an easy-to-follow, artistically-presented and friendly introduction to the world of the Great American Songbook for pianists making music with vocalists. It is filled with musical examples and gems of wisdom.”
— Tamir Hendelman, accompanist to Barbra Streisand, Natalie Cole, Tierney Sutton