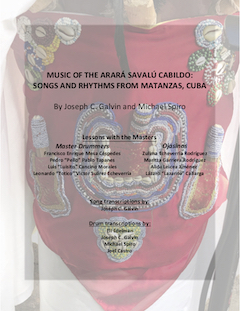 Music of the Arará Savalú Cabildo


One of the most beautiful and complex forms of Afro-Cuban music is also one of the island’s least known – the Arará Savalú sacred music from the city of Matanzas, Cuba. Originally brought to Cuba from Dahomey (Benin) during the slave trade, it has survived as a religious and cultural tradition since the end of the 19th century. However, the music has historically been a fiercely guarded secret, performed only at ceremonial occasions by the members of the Savalú community. Very recently though, there has been a desire on the part of the Cuban Arará community to expose their music to the outside world, and this book is the first of its kind to thoroughly document the rhythms and songs of this profound tradition.

There are beautiful photos included of the artists and the instruments, as well as a substantial audio component available for download that contains a complete oro seco and many of the songs included in the book. This will help you contextualize the songs and rhythms, and give you a feeling for the true sound of the music.

The accompanying audio for Music of the Arará Savalú Cabildo is a mixture of the authors’ song lessons and an outdoor recording session of the full community performing the music of a typical Arará ceremony, recorded between the years 2013-2016. These tracks are not intended to be an exact replica of the songs, rhythms, or the order of material from the book, nor is it a compendium of every song notated in the text. Rather, this collection is an accurate representation of how traditional Arará Savalú music sounds in practice.

The original plan was to travel to Cuba once again and set up a multi-track professional recording session to give us clarity of each part, but the 2020 pandemic quickly made that concept impossible. In lieu of that, the authors created an accompanying album of their research recordings, which has equal merit in that it provides the listener with a true sense of the music. This means at times the drums overpower the voices, the melodies may become obscured, or the chorus sometimes might not follow the lead singer perfectly. These are all elements of the musical tradition as it is actually utilized by the community and worthy of experiencing as a student for true contextualization. You may notice differences in the order of rhythms in the oru seco, or slight differences in words depending on who is singing the lead part; this should not concern you as Arará is a living, breathing artform.


All proceeds of this book will go to the master musicians in Matanzas, who have so graciously shared the culture and knowledge.